Michael Saunders is accustomed to spending time in hospitals. As the lead courier for Integrated Regional Laboratories in Jacksonville, Saunders role is to help safely transport lab specimens from hospitals, such as Memorial, to a laboratory facility for testing.

Recently, Saunders had a frightening experience when he became a patient himself. He was nearing the end of his work day when he says he started vomiting. 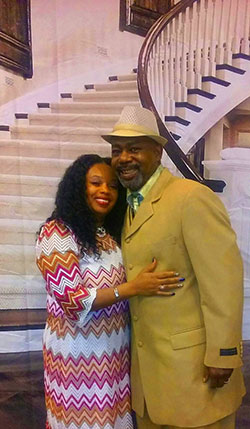 "I was at work doing my normal thing and I thought I was having a case of acid reflux," he said. "Come to find out it was a heart attack."

Saunders was picking up specimens at the Memorial Emergency Center - Atlantic when a nurse stopped him and asked if he was okay. Saunders says he initially tried to brush it off.

"Men can be stubborn when it comes to our health. We try to tough it out but something told me to just let them check it out."

After an EKG, Saunders was transferred to the main hospital on University Boulevard where physicians discovered he had suffered a heart attack. With three arteries blocked, Cardiothoracic and Vascular Surgeon Dr. Dale Mueller performed triple bypass surgery to replace the damaged arteries supplying blood to Saunders heart muscle.

"With less blood flow, the heart muscle is more likely to become exhausted and fail if it's not receiving enough blood," said Mueller. "Fortunately, we were able to bypass the blockages quickly, which helped reduce long-term damage to Saunders heart."

Saunders says he's grateful for the quick action of the staff. He says everyone went out of their way to ensure his experience was exceptional.

"They didn't just go through the motions," said Saunders. "I could feel their compassion and I could tell they were doing this out of the kindness of their hearts. I had an overwhelming feeling that they cared for me."

Saunders is home recovering but is improving every day and plans to go through cardiac rehab to further strengthen his heart. As a father of four and a grandfather of two, Saunders says this Father's Day this year was extra special for him. He says he feels "blessed and favored by God" to be alive and says he's here today because he listened to his symptoms and got help right away.

"I encourage others to go get checked out and not to hesitate if something doesn't seem right," he said. "I'm here today through the grace of God and being in the right place at the right time."

June is Men's Health Month, which is dedicated to increasing awareness of preventable health problems and to encourage men and boys to seek regular medical advice and early treatment for disease and injury. You can make an appointment or find a doctor now.

July 10, 2018
Irritating bug bites are often harmless, but some are painful, and may cause an allergic reaction, infection or worse. Gabriel Schifman, DO, ...
Previous Post
Memorial Hospital

The Great Sunscreen Debate: Which Type Is Best...

June 7, 2018 by Joshua Patton, Doctor of Osteopathic Medicine Candidate 2019, and Megan Barber, Doctor of Pharmacy Candidate 2019
Many people dream of having the perfect tan, but in reality we are causing more harm than good. Too much sun has been linked with not only skin...
Next Post
Back to blog home

Even a 2-minute Walk Counts in New Physical Activity Guidelines

The Right Way to Treat a Sinus Infection

The importance of well-woman visits

What is CBD and why are so many people using it?

Gas: What’s Normal and What Isn’t?