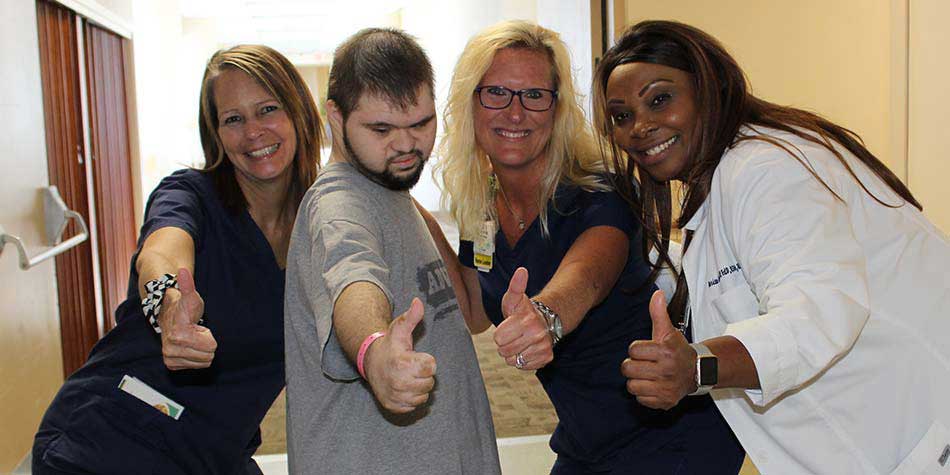 Alex Sanchez has been in the hospital for nearly a month but he doesn't let that get him down. Alex, who has Down syndrome, loves music and dancing. When doctors and nurses told Alex he needed to get up and move every day, Alex took the doctors' orders literally. Every day, his dad plays music on his cell phone as Alex busts a move around the unit. It has become a routine and the nursing staff even gets in on the action.

"I know Alex and he won't get going unless he has music," said Alex's dad, Danny Sanchez. "Whether it's Latino music or rock n roll, Alex loves to dance."

5 Central Nursing Director Cheryl Barr says Alex has touched the hearts of all of her staff members and brings them joy on a daily basis.

"We have all developed a very special bond with Alex and he has become like family to us," said Barr. "Although we're here to touch patients' lives, Alex has certainly touched ours with his dance moves, hilarious poses and sweet smiles. Alex is a true reminder of why we all got into the field of nursing."

Protecting Your Health from Air Pollution

October 16, 2018
Research suggests that, even at safe levels, air pollutants can harm your health. A reduction in short-term exposure to particulate matter from...
Previous Post

How to Stay Healthy in an Office Full of Sick ...

October 9, 2018
During the height of flu season, you'll likely find yourself surrounded by coughing, sniffling and sneezing coworkers. Thankfully, protecting...
Next Post
Back to blog home

Can acupuncture ease your chronic pain?

7 signs it's time for knee or hip replacement surgery

Preventive screenings: What you should know